In this post we will be updating you on the work in progress on the tower – for the first post in this series please click here.

On Wednesday 4th September Brett, the stone mason, began his work to repair the broken gargoyle.

The first stage of his work involved cutting out a block from the tower so he could embed the block of stone needed to repair the gargoyle.

Brett cut a 14 and a half inch tall block of stone (the height needed to carve the gargoyle’s face) at one end so it would fit in the tower wall.  With Will’s help Brett offered the stone block up and marked where the inside cuts were needed – the inside cuts are to allow the new stone to sit flush to the old stone and also to accommodate the water pipe. 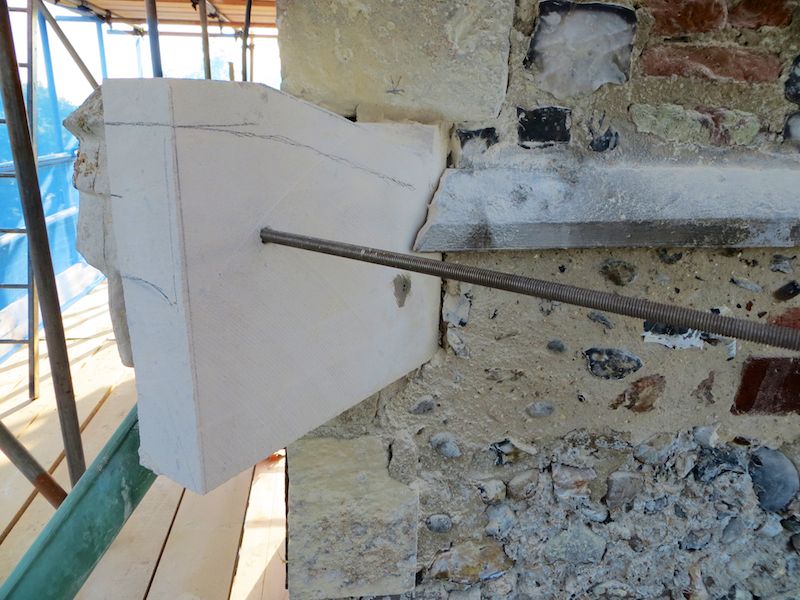 There is a gap between the old and new stone – once the carving is complete Brett will fill the gap (“pointing”) with a lime mortar.  This lime mortar includes lime from stones Brett has ground and shaped in his workshop – the dust is collected and filtered (to keep out any unwanted debris or larger lumps of limestone) and reused.

On Thursday 5th September Brett began the job of carving the outside of the block to recreate the face of the gargoyle. 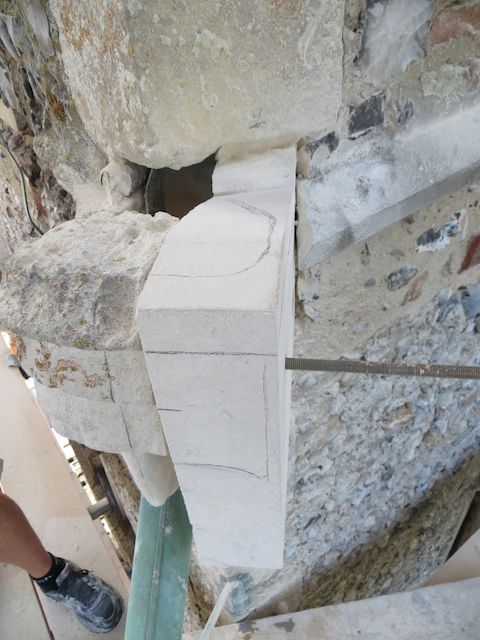 Block marked up prior to shaping 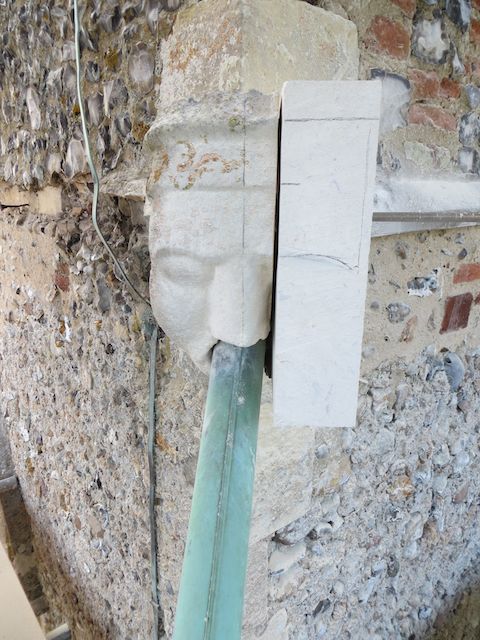 Marked up block from the front 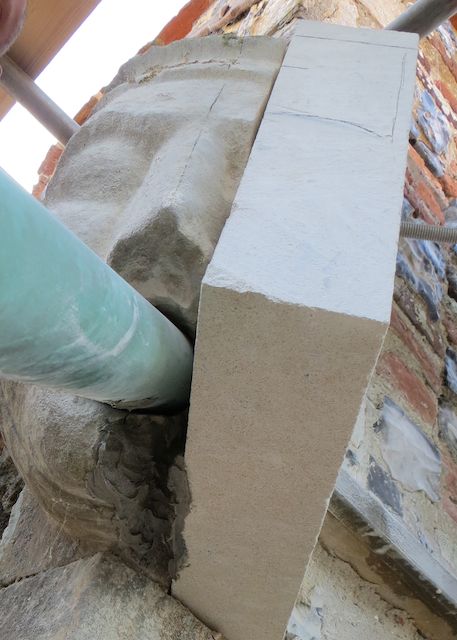 Underside of the block showing the join into the tower 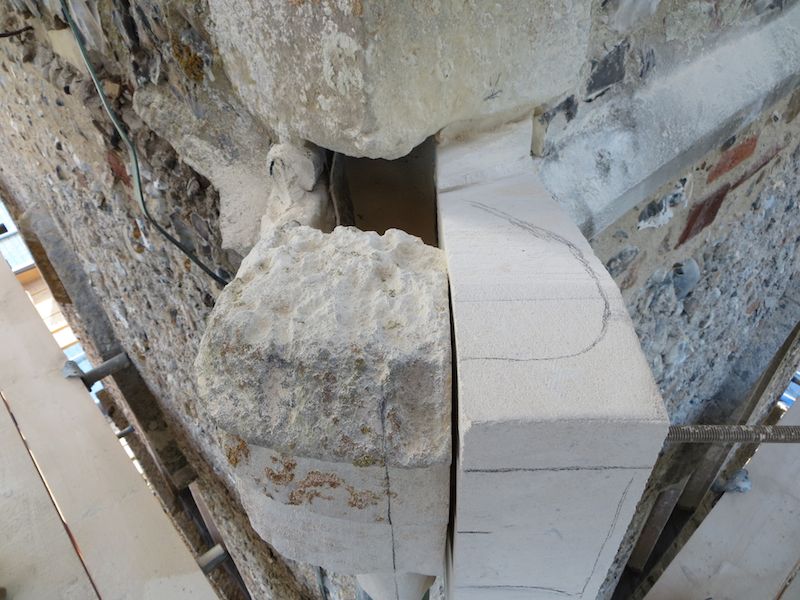 Details Brett has to consider include the puffed out cheek, lines defining the face (possibly representing a hairline or hair covering) and the fact the old side of the gargoyle is worn down.

The following pictures were taken during the first day of carving and show progress from the marked up stone block towards the final gargoyle. 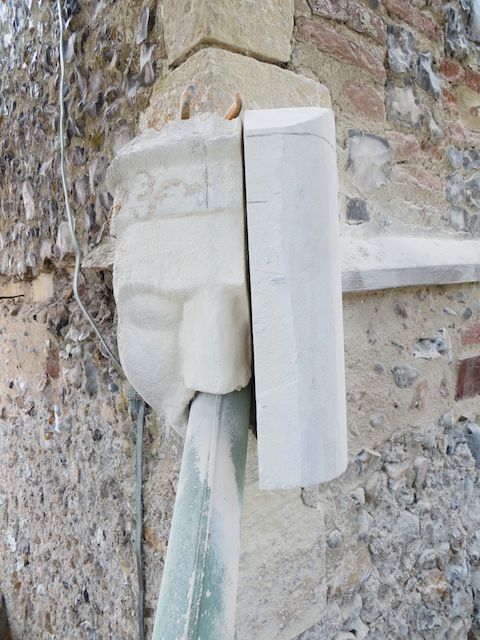 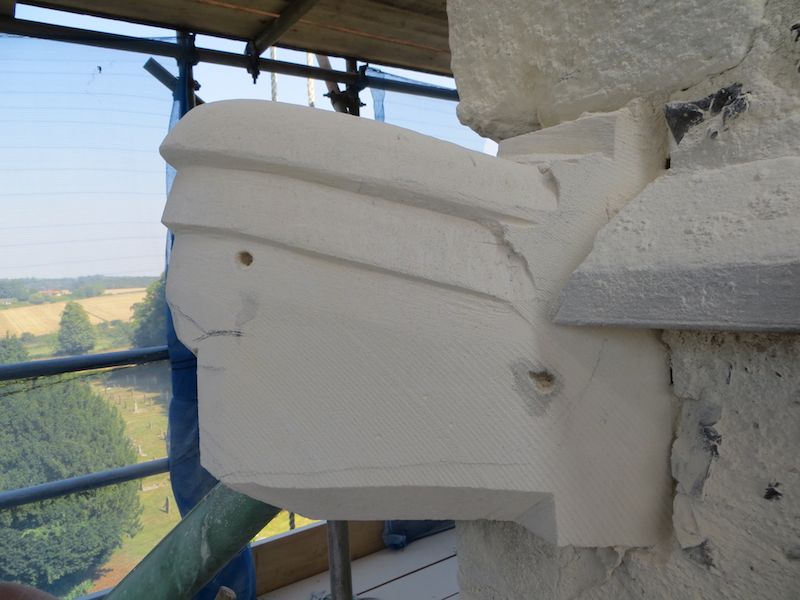 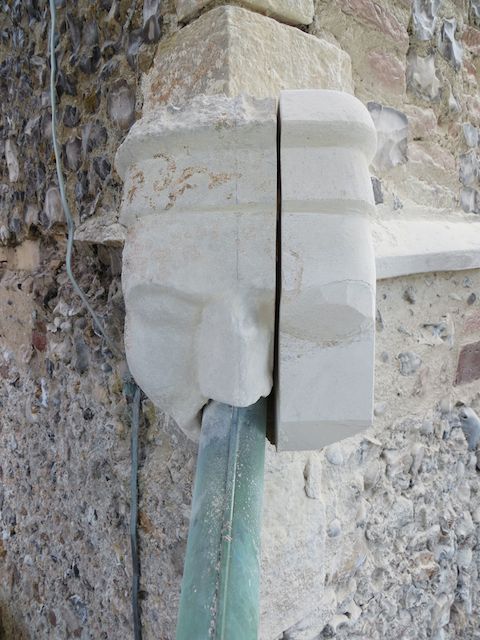 Starting to shape the eye 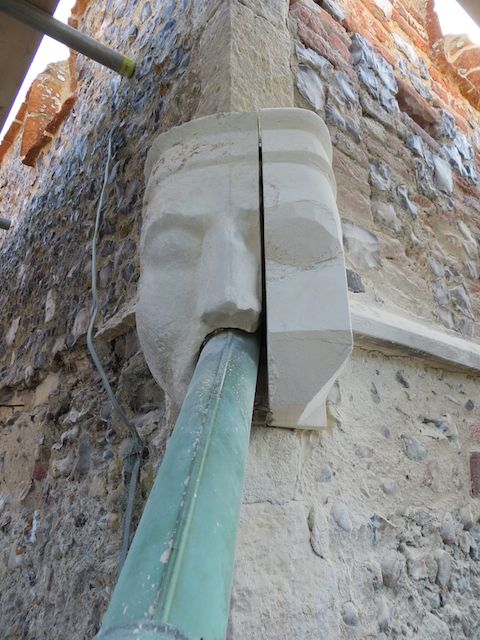 Creating the angle for the cheek and jaw 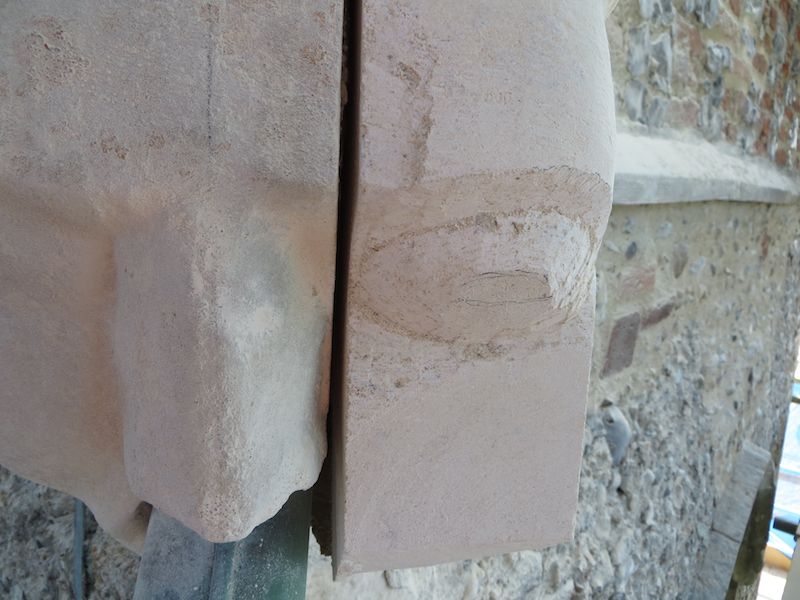 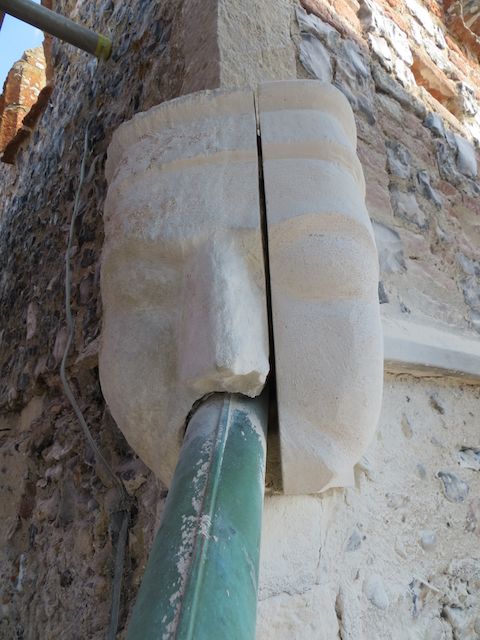 Gargoyle at the end of the first day 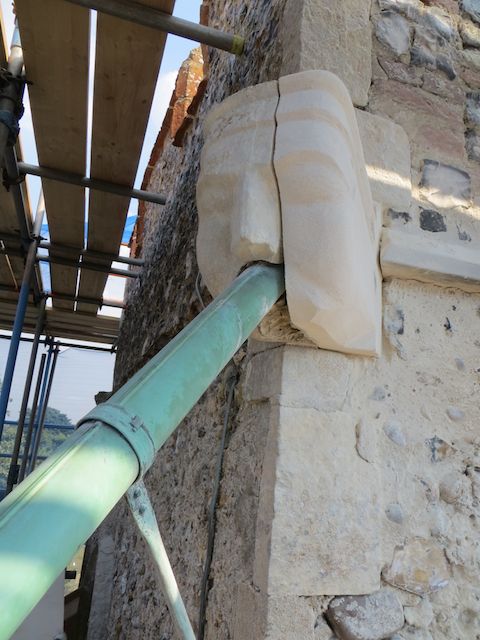 At the end of the first day of carving

The top of the new side is smooth, one of the last stages will be to mimic the surface of the old side by chiselling dimples to match the old side.

Brett also has to cut the stone above and under the actual gargoyle to match the join to the tower on the old side. 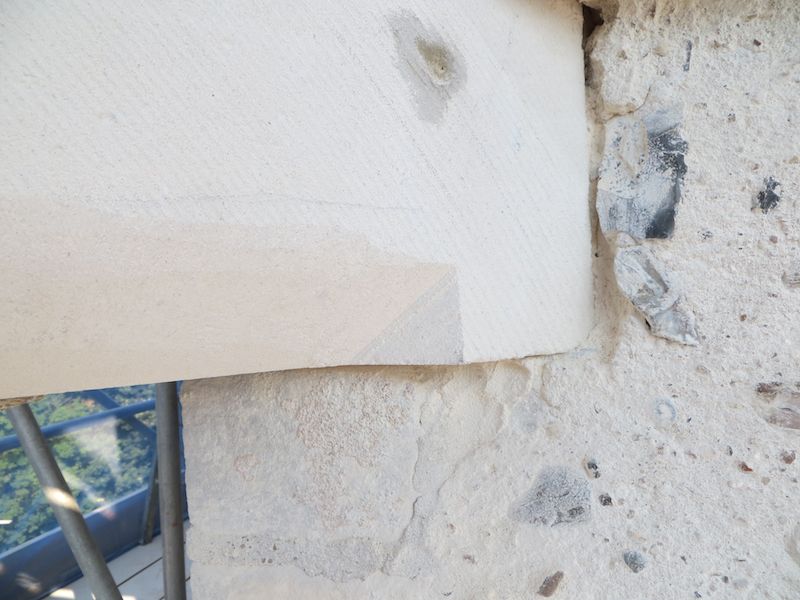 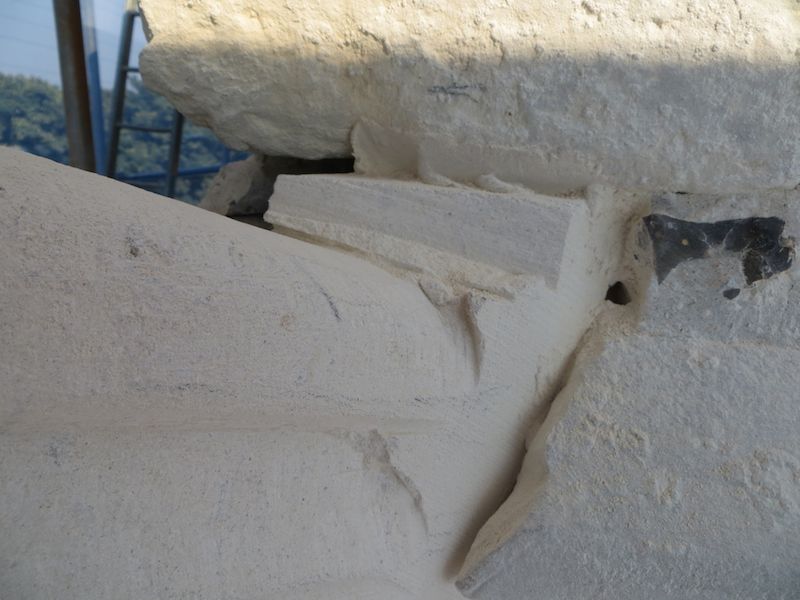 Starting to shape towards the top join with the tower

Looking at the features of the gargoyles and grotesques Brett estimated that they would have been installed when the tower originally went up or shortly thereafter.  There is no documentary evidence to confirm when the current tower was built but it is believed to have been in the 14th Century.

Roger and Will have been installing the louvres.  These have been made from European oak – the trees have their branches removed as soon as they start to form, this means that there are hardly any knots in the wood giving lengths of strong wood with a fine grain unlikely to warp over time. 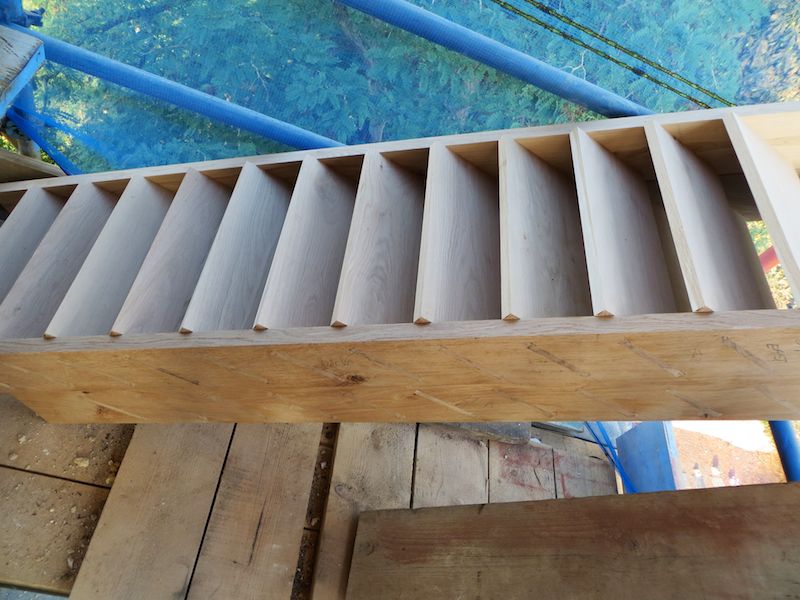 The bricked up sound openings have had the outside of the brickwork rendered prior to the louvres being installed. 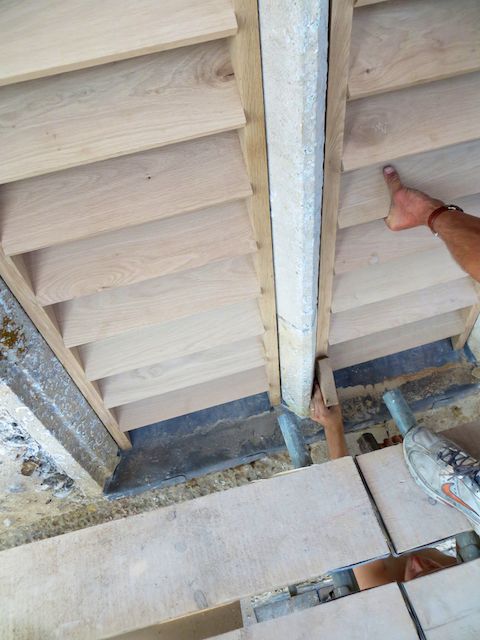 Tapping the louvres into position

Tapping the louvres into position at the top 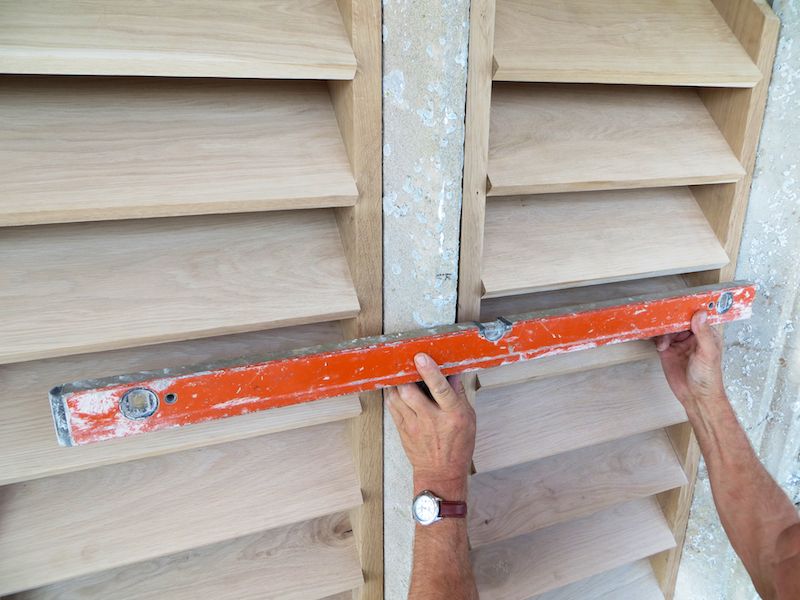 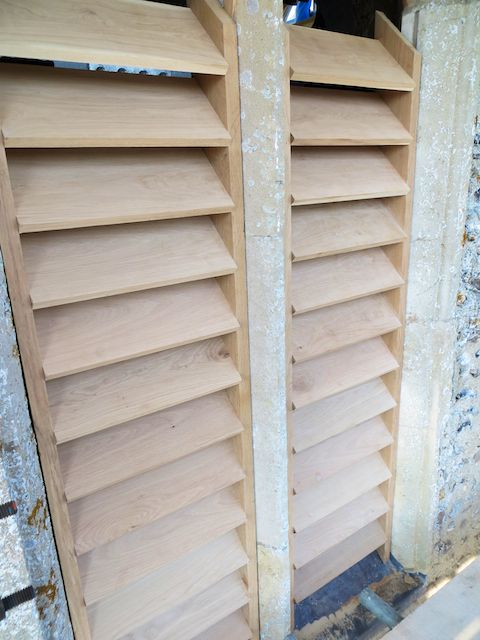 Behind the louvres a steel grid has been installed to prevent bats entering the tower.  The steel is 12 gauge and the grid is rectangular (75 by 12 mm).

For the time being access to the inside of the tower is still needed so the louvres on the west side are not yet installed.

Other repairs that have been done since the last post include: 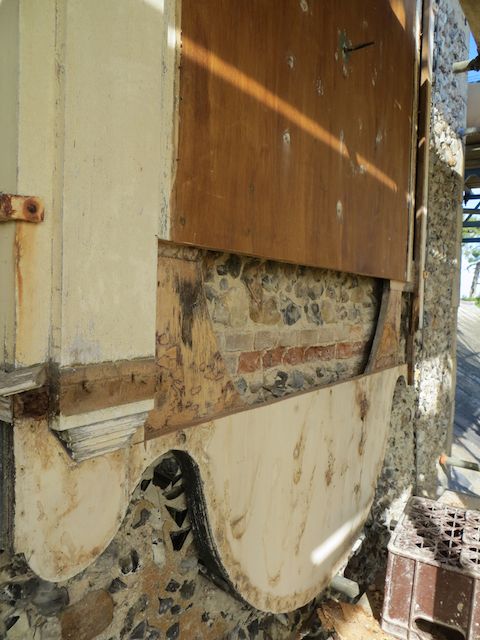 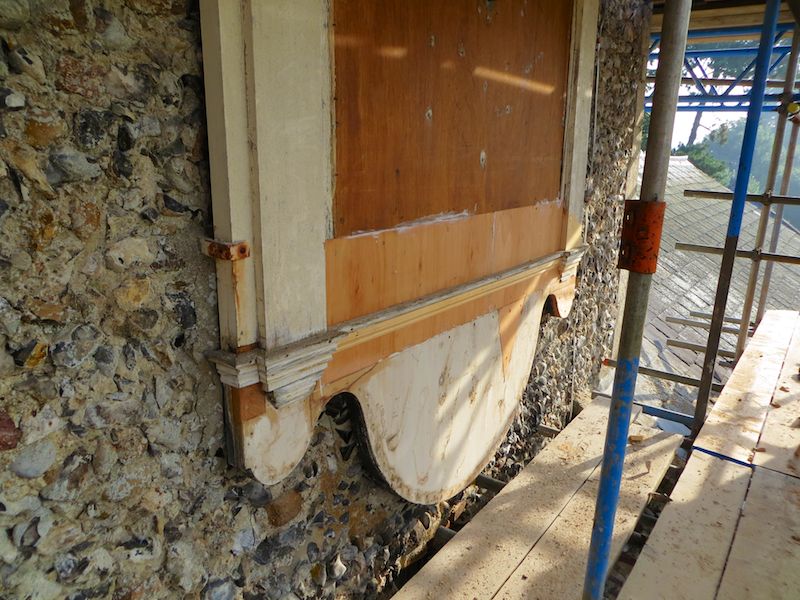 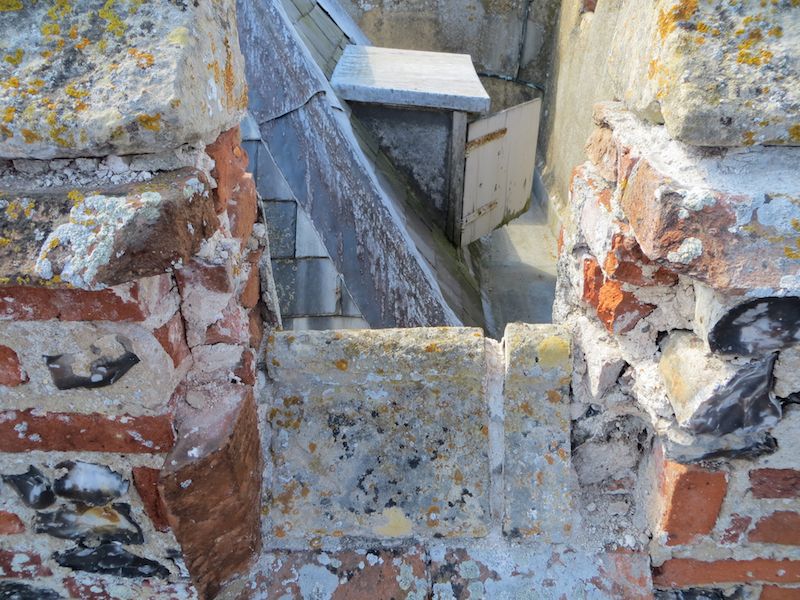 Example of repairs needed at the top of the tower 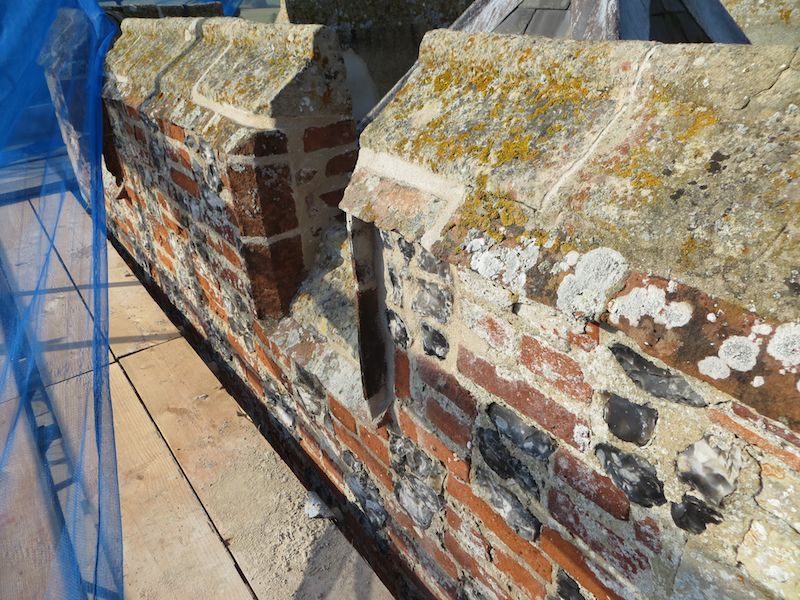 Example of repair at the top of the tower (this is the same area as the previous picture from a different angle.)

Many thanks to Brett, Roger and Will for their help.

5 thoughts on “Repairing the Gargoyle, installing louvres and other work.”