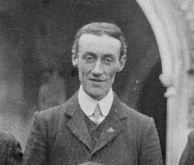 John Fredrick Wilson was born in 1888 – in the 1901 Census he was living in Pitts Hill with his mother and step-father, Alice and William Moore, three younger brothers – William, Albert and Walter – and his younger sister, Gertrude.  It appears that he sometimes used his middle name and on occasion his step-father’s surname.

By 1911 the family had moved to Tower Cottage, Saxlingham Thorpe, and the Moores had had three more sons: Arthur, Robert and Ernest.  In the 1911 Census the 23 year old John was described as a gardener.

He enlisted in August 1914 and served as a Corporal in the 4th Battalion of the Norfolk Regiment.

He married Miss Julia Foxhall of Dereham whilst on leave at the end of 1914 – the marriage was reported in the Eastern Daily Press on 1st January 1915.  They had one son, Ernest F Wilson, who married Ida May Nicholas in Staffordshire in 1940.  Ernest and Ida had two daughters.