If you visit the Church there is purple folder at the back of the North Aisle – this folder tells the story of Alfred Funnel. (Note: August 2013 – we are currently updating the folder with new information/photos we have recently found.)

Born on 22nd July 1892, the first child of George and Elizabeth Funnell, the village bakers.  He attended the village school until the age of thirteen when he began working alongside his parents learning the trade of the baker and delivering bread.

Alfred was the eldest of nine children.  He had five sisters, Lillian, Ethel, Evelyn, Ida and Kate who were three, seven, thirteen, fifteen and sixteen years younger than him respectively.  He had three brothers, Robert, George William and Arthur who were six, nine and eleven years his junior respectively.

He was eighteen in 1910 when the photograph above was taken.  On 21st November 1914 Alfred went to a recruitment meeting in the village, signed up and went to France to serve his country in The Great War.  On the 4th September 1916, aged 24, Lance Corporal Alfred Funnell of The 1st Battalion Norfolk Regiment died in the vicinity of Falefemont Farm near the village of Guillemont on the Somme in France.  He has no known grave; he is remembered with honour on the Thiepval Memorial.

Alfred is also remembered on The Central Council for Church Bell Ringers Roll of Honour – the original books are held at St. Paul’s Cathedral and Alfred’s entry can be seen on their website here.  (With thanks to David Underdown for this information.) 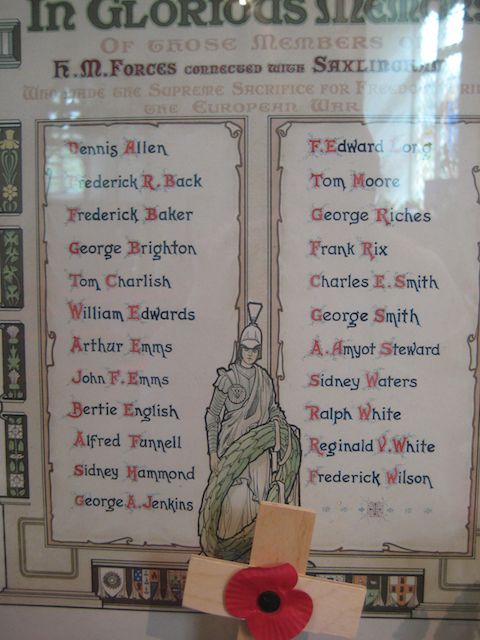 Memorial – those who fell in The Great War

Alfred’s younger brother, Robert, was also a bell-ringer at St. Mary’s.  In the 1901 Census his age was recorded as two.  He enlisted as a Private in the Tank Corps in March 1917.  Robert survived The Great War.

His fellow bell-ringers rang at his funeral and subscribed 2s each for a wreath in the shape of a bell.  Robert’s parents wrote to the bell-ringers on 1st May 1935 expressing their thanks for both the floral tribute and the ringing. 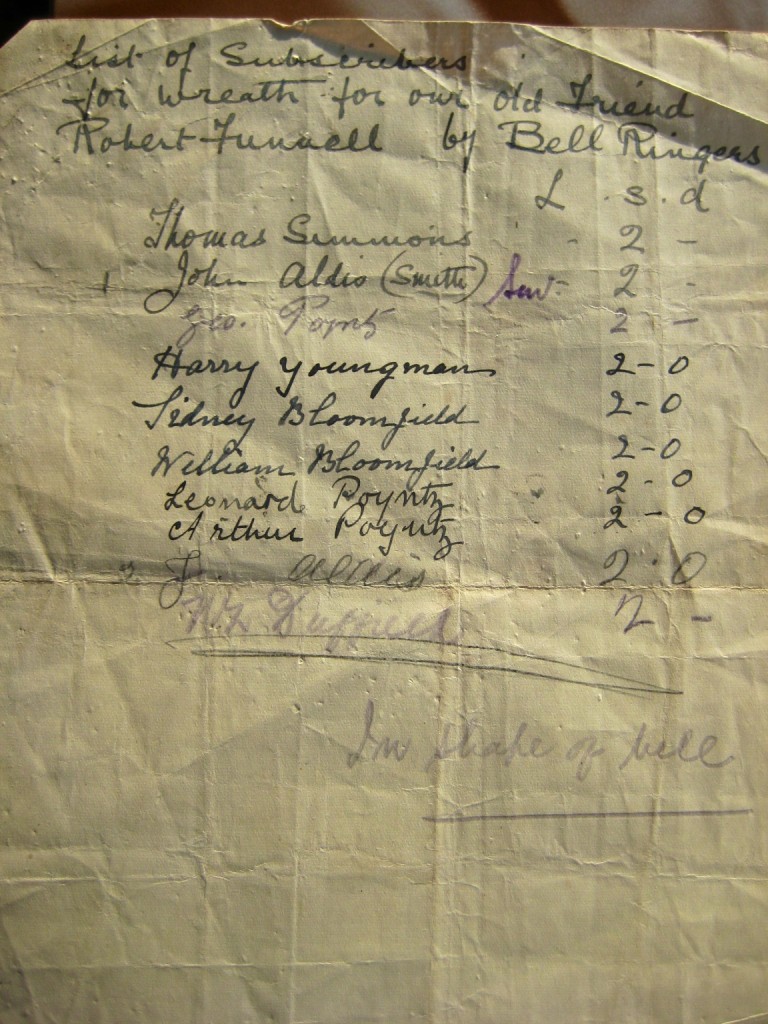 Bell-ringers subscribing for a wreath for Robert Funnell 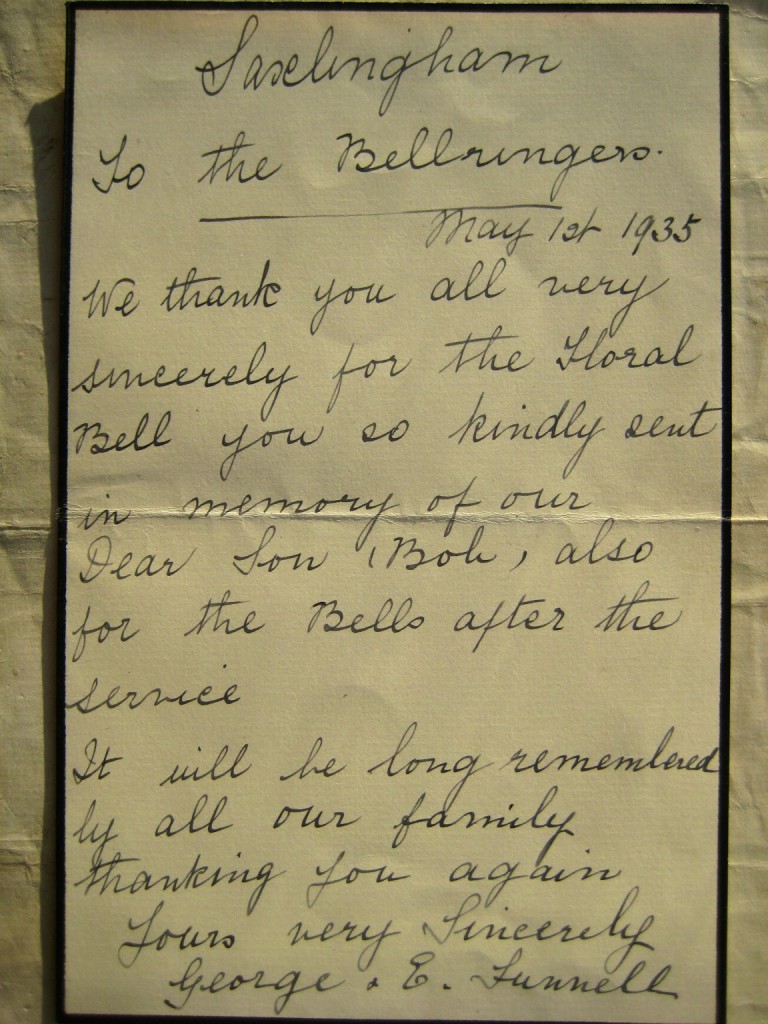 George and Elizabeth Funnell’s letter to the Bell-ringers 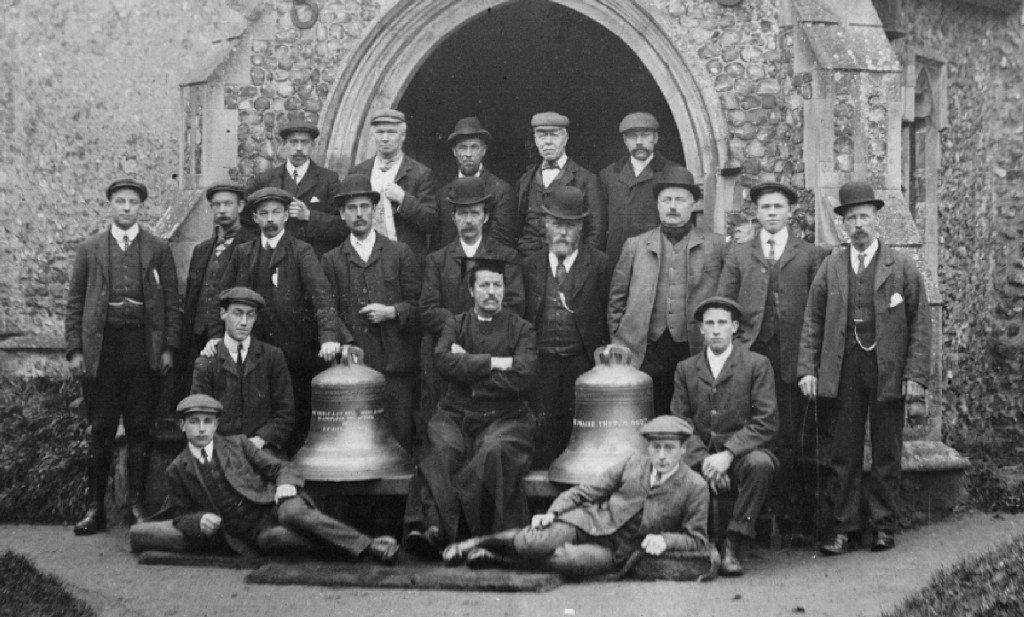 The St. Mary’s Bell-ringers in 1908 with the two new bells purchased by the Rev. Pitt (seated, centre).  Alfred Funnel (aged ~16) is the young man lying on the left.