On Saturday 27 July a group of enthusiasts attended a Calligraphy Workshop. Storm explained the origins of writing and how the art of calligraphy had spread across the world. She also described the various types of “paper” from marks on the ground or on trees to clay tablets, birch bark and parchment. She explained the different types of ink and brought along samples of iron gall ink and walnut ink.

Storm proceeded to involve all the participants in practising writing scripts starting with insular half uncial script – examples include The Book of Kells and the Lindisfarne Gospels – moving on to an italic script similar to that used in the early 1900s using the receipt for the previous bell work (written in 1909) as an example.  (To see an enlarged image of the receipt click here.) 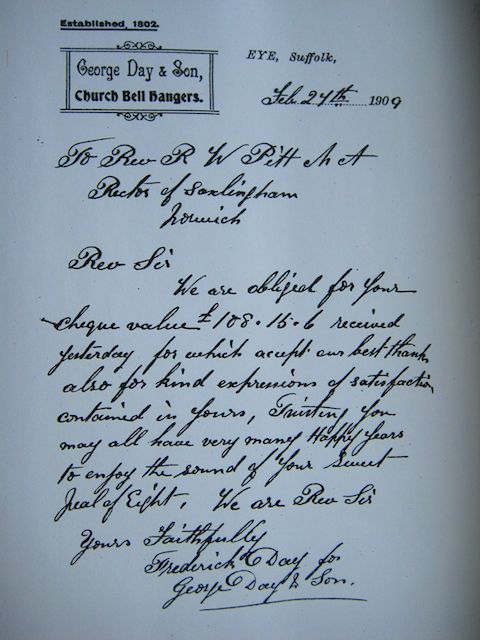 Many different types of pens were used from a modern felt tip calligraphy pen to dip pens with flexible nibs and square cut nibs, a music writer’s stave pen and a three tine pen for writing music notes. There was also a glass pen, a reed pen and an ultra modern tin can pen which gave some fine large letters and figures. Those who wished to cut quills from goose feathers.
Everyone had the opportunity to use all the various pens and used the scripts to which they had been introduced to make bookmarks on parchment or Christmas cards.
A very enjoyable time was had by all – and no-one spilt ink on themselves  or on the carpet!