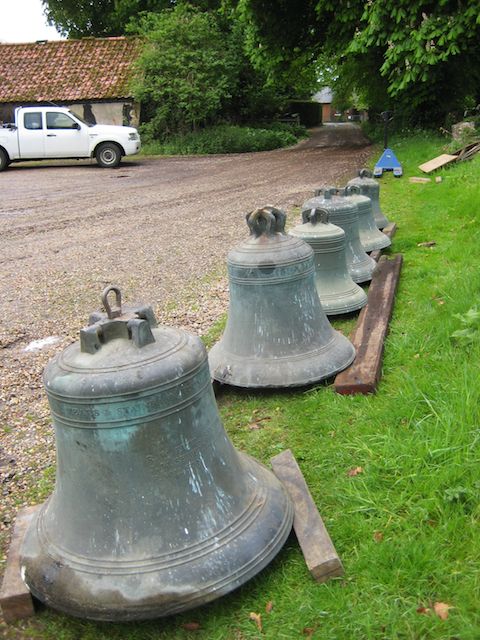 The bells at the side of the car park waiting for the lorry.

On Thursday 23rd of May, early in the morning, six bells were taken from the church – five never to return, one to be re-furbished so it can be hung as the clock bell.

In the days preceding their departure the bells were, in all probability, seen by more people than in the previous 105 years combined.

On Saturday 18th May ringers from the village and surrounding area spent two hours ringing the bells for the village – 24 people came to the church to ring and watch the ringers – many more villagers heard the bells as they rang out across the village.

On Sunday 19th May the bells were rung for the last time before the 09.30 Service.  Click here for details of the bell-ringing team on this day. 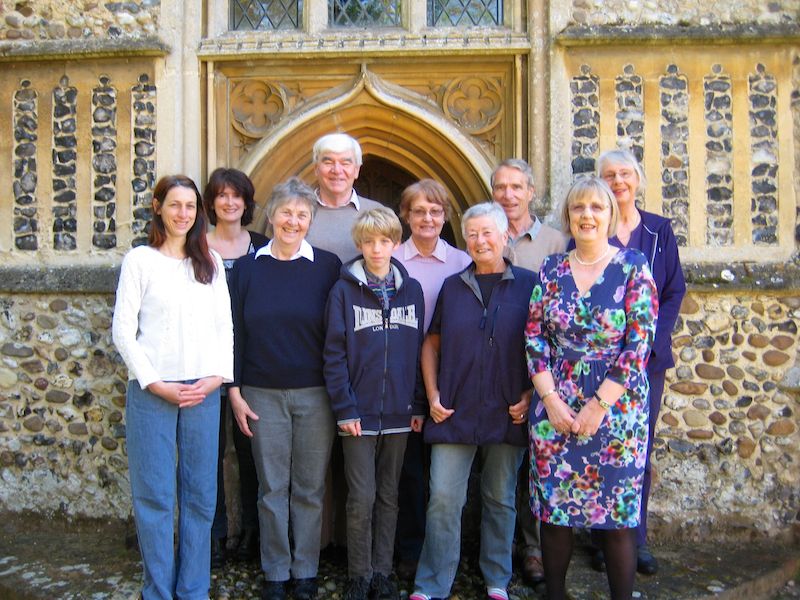 The Ringers on Sunday 19th May 2013 – the last time the bells were used before being taken down.

On Monday 20th May two gentlemen from the Whitechapel Bell Foundry arrived to begin the task of removing the bells from the tower.  A system of chains and pulleys was put in place once the floor panels had been moved to create a space for the bells to descend.  This system allowed just two men to safely remove bells weighing several tonnes. 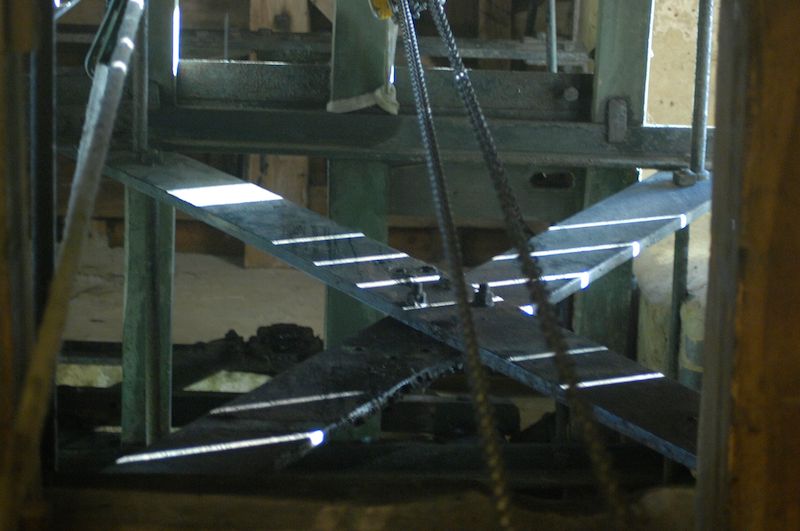 Looking up from the clock chamber into the empty tower – note the rare X shaped bell-frame.

The bells were lowered to the floor of the ringing chamber, wheeled out of the external door to the ringing chamber and back into the church for storage.  After the bells had last been hung, the Steward Memorial was fitted to the doorway linking the ringing chamber to the inside of the church.  The addition of the Memorial means that it was not possible to bring the bells directly into the church from the ringing chamber. Of the six bells removed from the tower five made it through the outside door with ease, one, the tenor bell, was just a little bit too big.  If you look closely about 6 inches from the bottom of the outside doorway you will notice a fresh gouge in the stonework – this was caused when the tenor bell, two inches, a mere 5cm too wide, was brought out of the ringing chamber.  It is testament to the skills of the Whitechapel Foundry that one very small gouge is all the evidence that one bell was too large for the doorway. 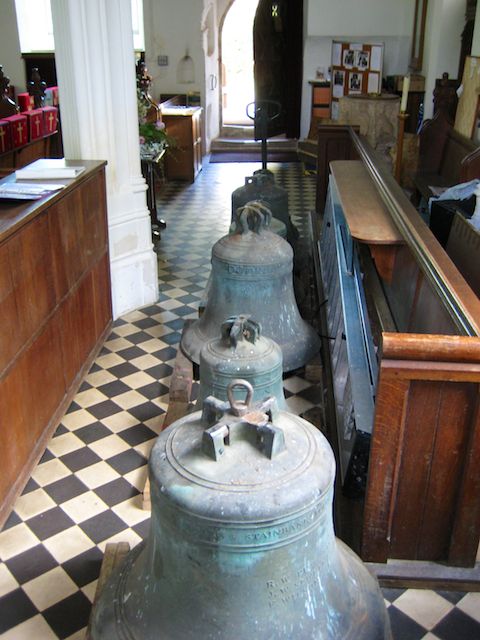 The Bells in the church waiting to be taken to London.

On the 22nd of May we were delighted to welcome the children from the village school to the church.  Peter and Neil from The Whitechapel Foundry kindly talked to the children about bells, how they are made and hung in the tower and also took questions including:

How do you get the bells down?  Using a system of pulleys and chains – each bell takes about twenty minutes to bring down.

How did you get them into the church?   Each bell in turn was put on a trolley and wheeled out of the ringing chamber’s outside door, around the side of the church and in through the front door using a ramp. 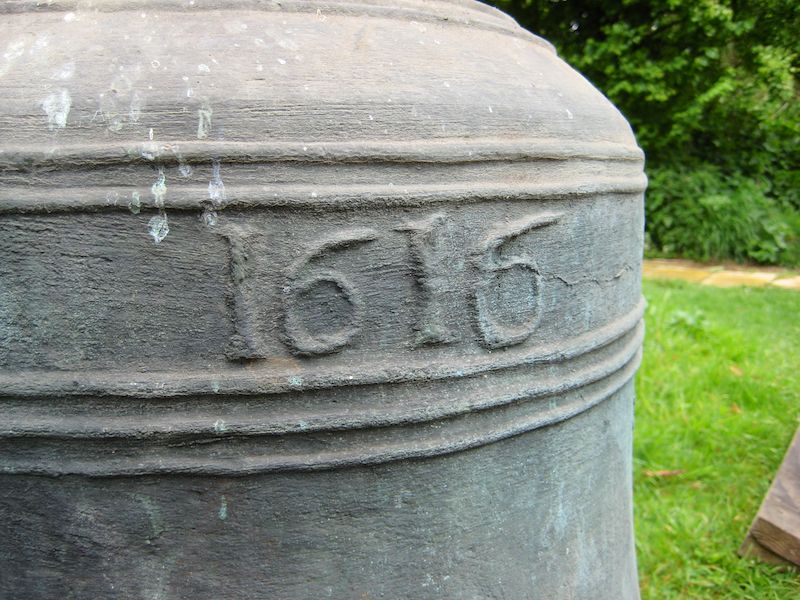 How do you get rid of the old bells?  The bells are smashed with 28lb and 56lb hammers.  The metal is then melted down in the furnace to make new bells.

How long does it take to smash a bell?  This depends on the size of the bell and the metal composition.  A small bell can be smashed in 20 minutes, a large one may take a whole day.

Have you ever hit yourself with a hammer?  No, but the blacksmith has! 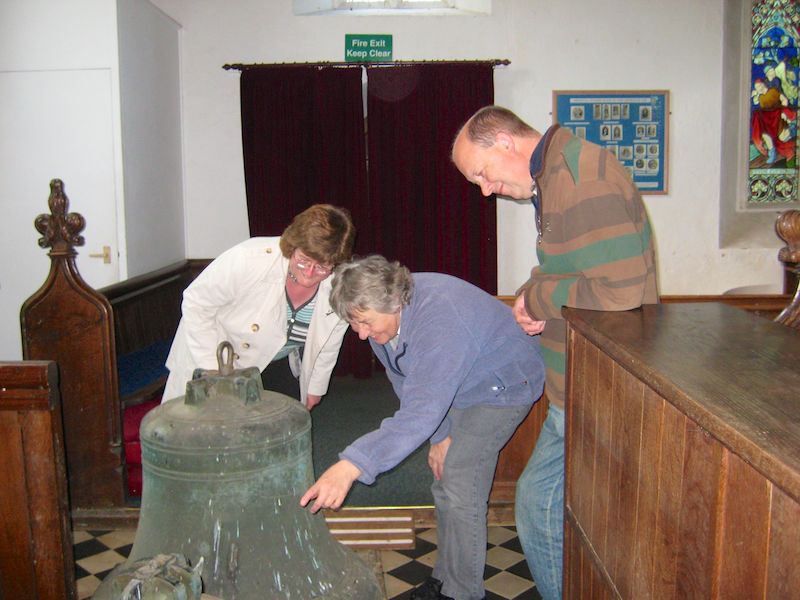 Taking the opportunity to examine the bells.

Later on in the afternoon and again in the evening volunteers opened the church for anyone to come and view the bells.

On Wednesday 22nd May 38 school children, 5 staff from the school and a total of 43 visitors from the village and surrounding area saw the bells – a great send off! 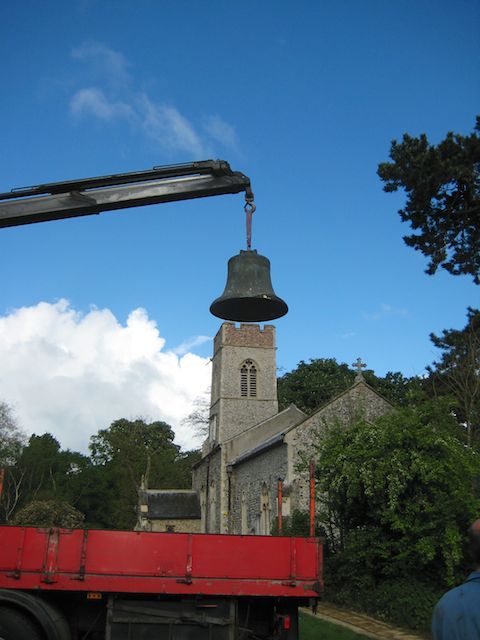 Bell being lifted onto the lorry

On Thursday 23rd May the bells were loaded onto a flatbed lorry (along with another Norfolk bell from the church at North Tuddenham) ready to be transported to the foundry in London.  It was “Goodbye” to five of the bells – their inscriptions and details will be carefully recorded at the foundry – the sixth, originally cast in 1616, will be renovated and prepared for hanging as the clock bell later in the year. 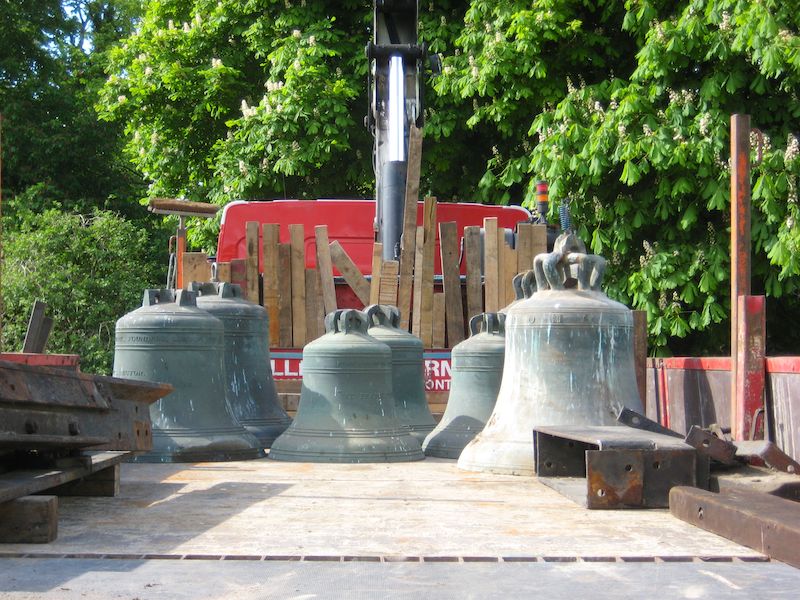 At 3pm a team of volunteers arrived to sweep up and tidy the old fittings and fixtures away.  At the next meeting of the PCC it will be decided what will happen with the fixtures and fittings, current ideas include selling the fittings at the church fête (as memorabilia, for artists to use as a base for sculpture, to create a garden feature, any other creative use!) and using some of the wood to make souvenir pens. We will keep you informed as to the fate of the fittings and fixtures and give you plenty of notice so you may have the opportunity to obtain a piece of Saxlingham history! 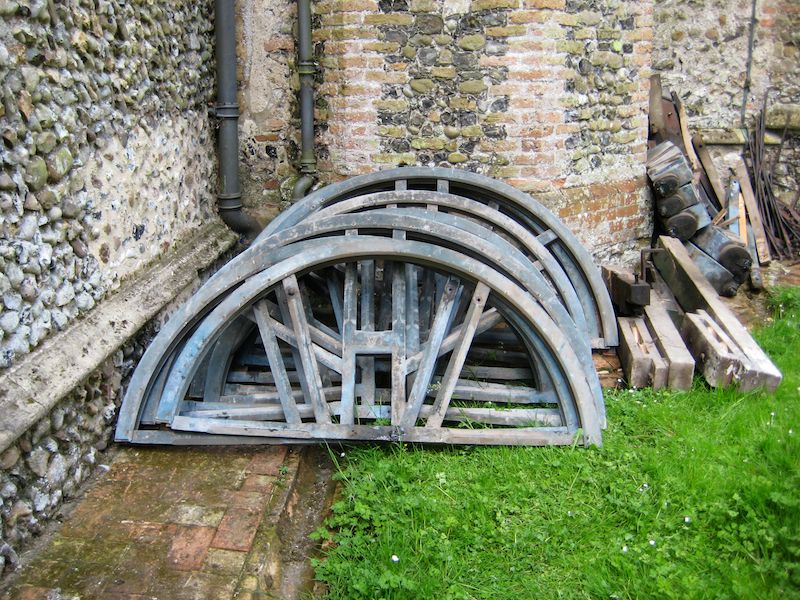 The old fixtures and fittings. 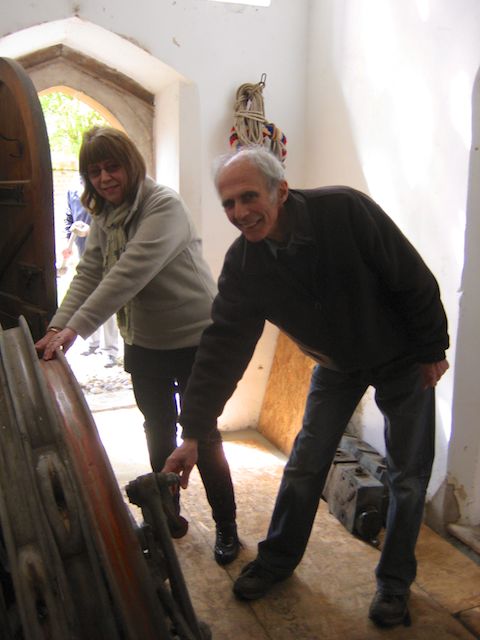 Storing the fixtures and fittings safely

Next time you walk past the church you will notice that we have a smart Heritage Lottery Fund banner on the front railings.  Thank you to everyone who volunteered to help! 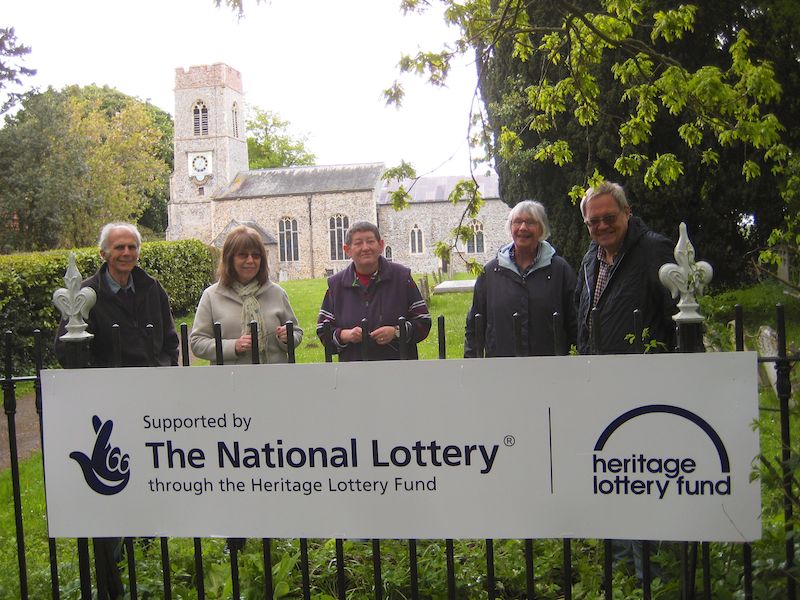 We are very grateful to The Heritage Lottery Fund for their support. 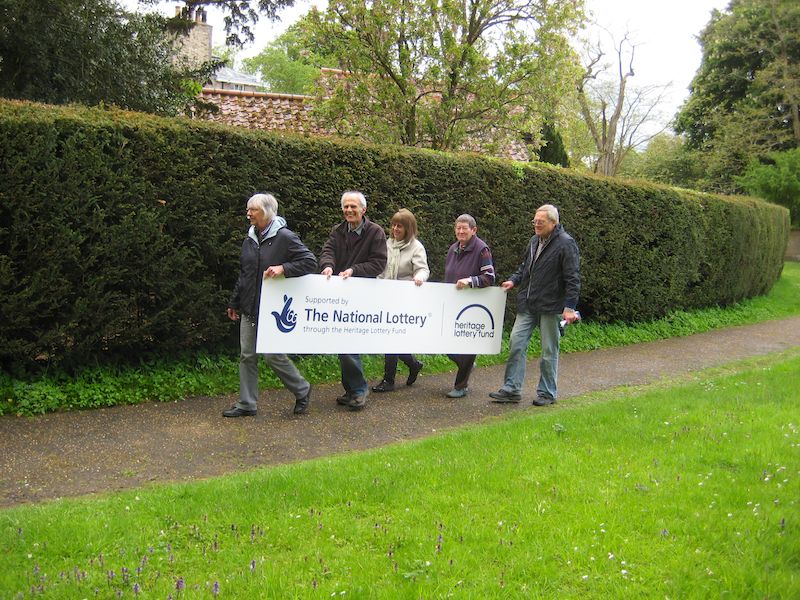 HLF Banner being taken to the church railings

We have finalised the dates for several events over the summer - please click here for full details.

The first date for your diary is 27th June at 19.30hrs when Mr. Simon Rudd, the Ringing Master at St. Peter Mancroft, will give a talk on bell-ringing in the church.

We also have genealogy and calligraphy workshops arranged and will be introducing a new church trail.

Arriving on the Whitechapel Road at the bell foundry it is easy to be transported back into history.  The foundry has been active since at least 1570 and has been at its current location for several hundred years.  The facade of the building has changed little in the last 200 years; police knocking on every door in Whitechapel during the hunt for Jack the Ripper in 1888 would have seen the same as those walking down Whitechapel Road in 2013.  The Whitechapel Bell Foundry is living, working history.

Going through the front door of the foundry you are greeted by the warmth and coziness associated with an old fashioned pub – unsurprising as, before the building became a foundry, it was a public house (The building was constructed around 1670 replacing a previous structure lost in The Great Fire of London).  Displays show details of many of the famous bells cast at Whitechapel – The Liberty Bell, The Great Bell of Montreal, Bells for Westminster Abbey, the Bell sent to New York from London commemorating the 9/11 tragedy and, most famous of all, Big Ben.  A cross section of Big Ben surounds the door to the foundry – a grown man can easily pass under the cross section and when you see the size of the doorway you get some sense of the size of the bell, Big Ben.

Before going to the foundry floor we were given a short talk explaining how a bell is made.

A strickle – which is half of the cross section of the bell – is made.  This is essentially the pattern – it defines the shape of the bell and the thickness (which varies being thicker at the top and bottom of the bell than in the middle).

Then a mixture called loam is made.  Loam consists of water, clay, sand, manure and goats’ hair.  The loam is mixed up and some is baked into curved bricks.  The curved bricks and loam are used to build the inner mould – also known as the core. The strickle is used to smooth the loam into the precise shape of the bell. The core is dried in an oven and then covered with graphite.

A bell shaped outer mould is lined with loam and the outer edge of the strickle is used to ensure the correct shape for the bell. The loam is dried and then the final layer is applied.  This is quite a sloppy mixture – this layer needs to be slightly soft to enable any inscription to be made in it before it is left to air dry. 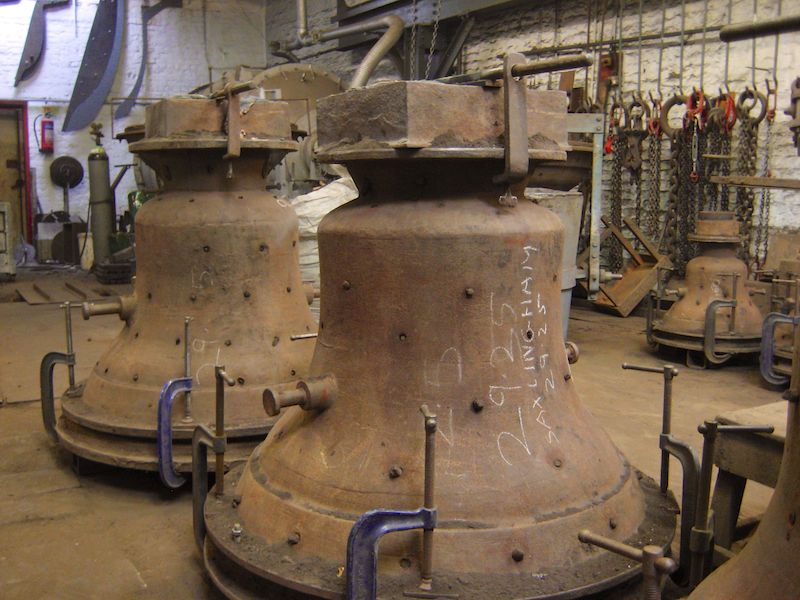 The inner and outer moulds are firmly clamped together to ensure a tight seal at the bottom and a special box is added to the top of the mould.  This box has two holes – one into which the molten metal will be poured, the other to allow air and other gases to escape during casting. 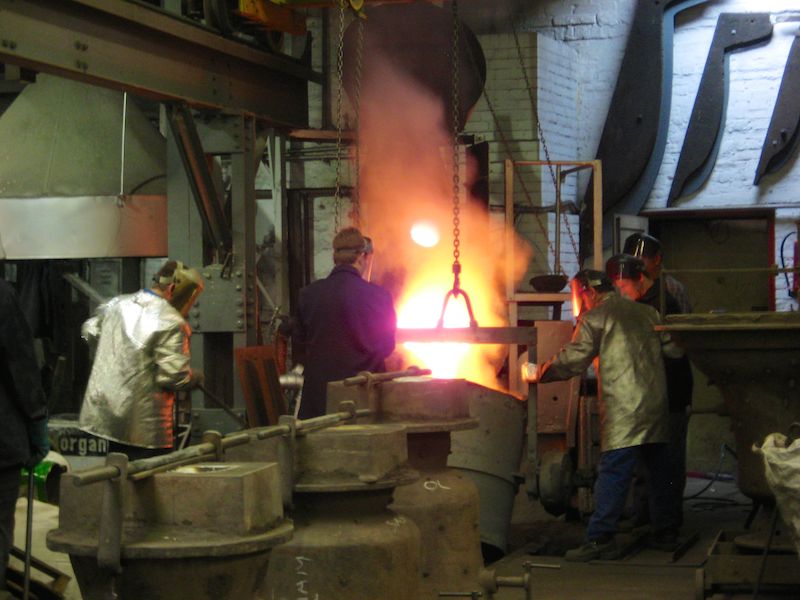 Pouring molten metal from the furnace into the ladle

A mixture of copper and tin is heated to 1,150 Celcius in a gas powered furnace, any gases in the liquid metal are removed by de-gassing with nitrogen, any impurities that have risen to the surface (called “slag”) are cleaned off the surface and the metal is poured from the furnace into a large ladle lined with graphite.  A manually operated crane moves the ladle to each of the bell moulds in turn.  The moulds are filled and, after the metal has settled for a minute or two, topped up. 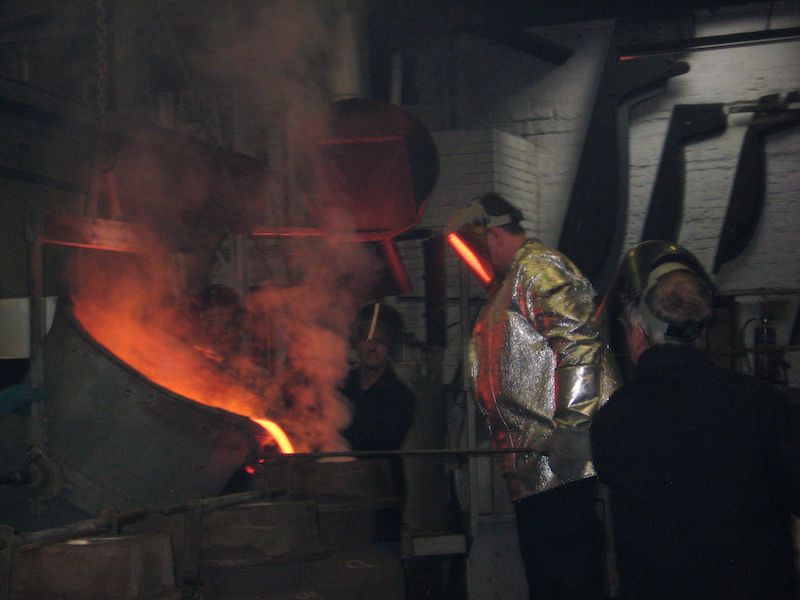 Pouring metal into the mould 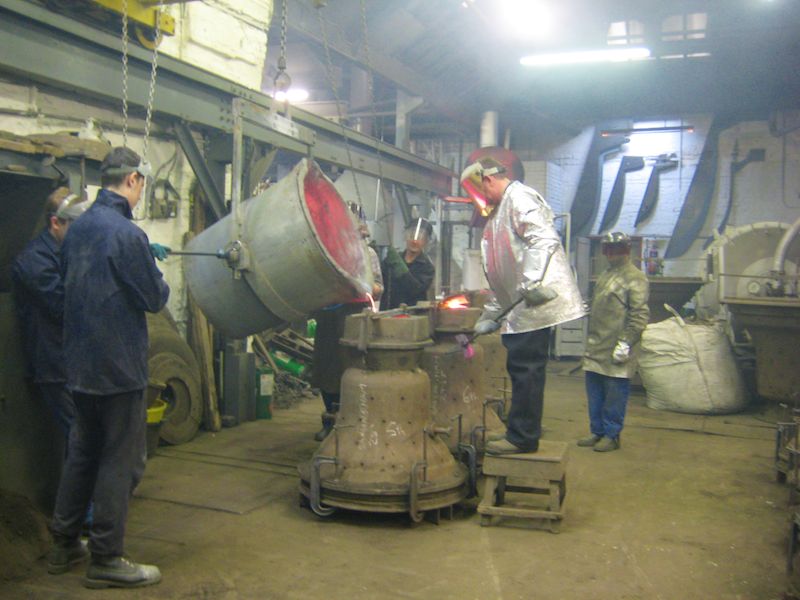 Topping up the mould

The process of casting has changed little in the last 4-500 years – to witness the heat, smoke and smells of casting makes you realise how old the art of the founder is – the skills required to handle and shape molten metal into something useful to man have shaped mankind’s development for centuries.  Casting bells is Whitechapel’s speciality but these same skills helped to mechanise farming and to drive the Industrial Revolution.  The role of the Foundry changed during times of war.  Canons are cast metal and many were probably made at Whitechapel (a fire in the middle of the nineteenth Century sadly destroyed most of the records), the foundry found itself in demand during World War Two and its aftermath (click here for more information from The Whitechapel Bell Foundry website.) 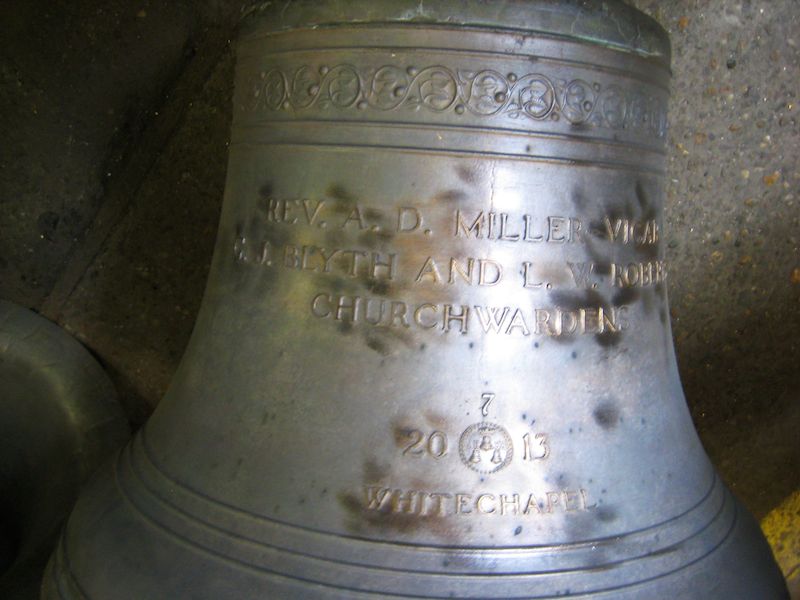 There are hundreds of notes in a bell, a careful process involving shaving metal from the inside surface of the bell little by little, testing after each shaving brings the five main notes in the bell into tune.  The bell is tuned whilst sitting upside down on a special turntable and the notes are checked with tuning forks and by computer. 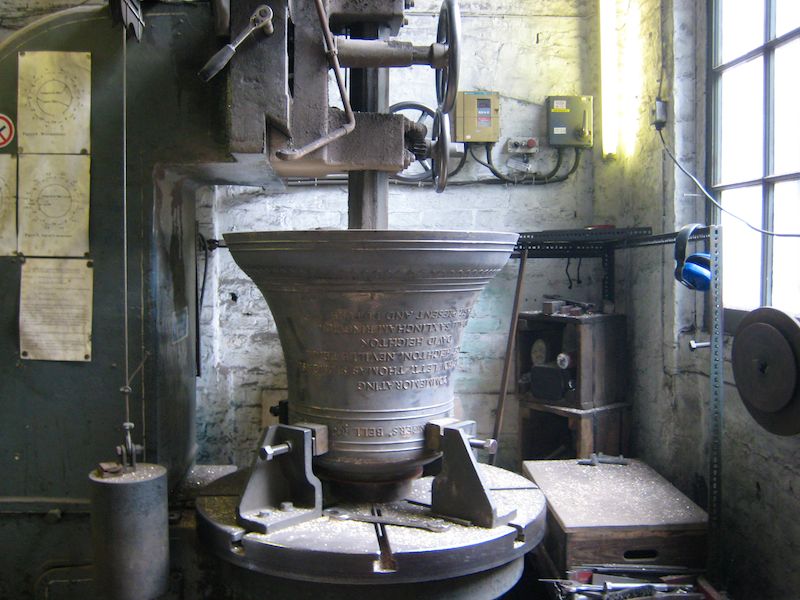 Tenor bell being tuned on the turntable

Tuning a modern bell whose shape is uniform and whose properties are well understood takes between one and one and a half days – tuning an old bell which may have an irregular shape, impurities in the metal etc can be a mammoth task. 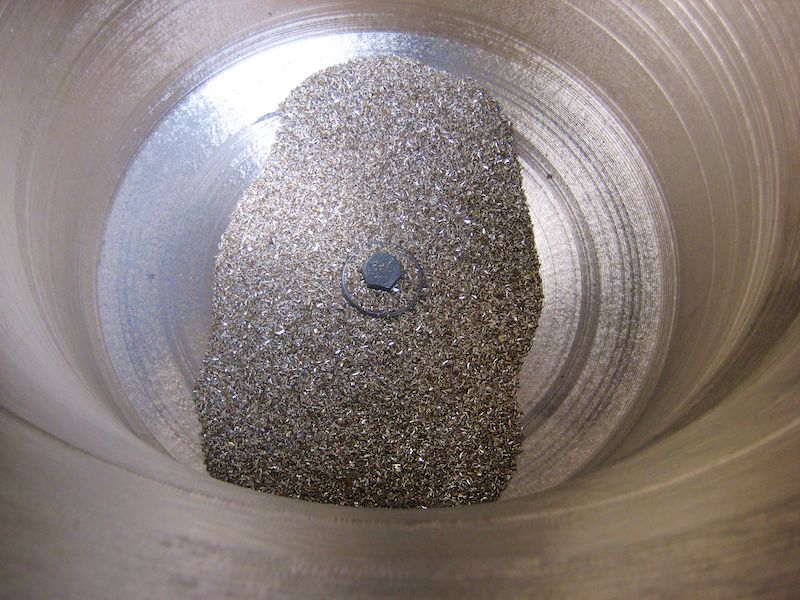 Inside of the tenor bell being tuned

Once tuned the bell has its inscription cleaned and made “sharp”, the outside of the bell is polished a deep black and the inscription is highlighted by being burnished.  Then there is just the small matter of preparing the bell for hanging by adding an appropriate headstock (also purpose made at Whitechapel), transporting the bell to the church, getting it up to the top of the tower and hanging it. 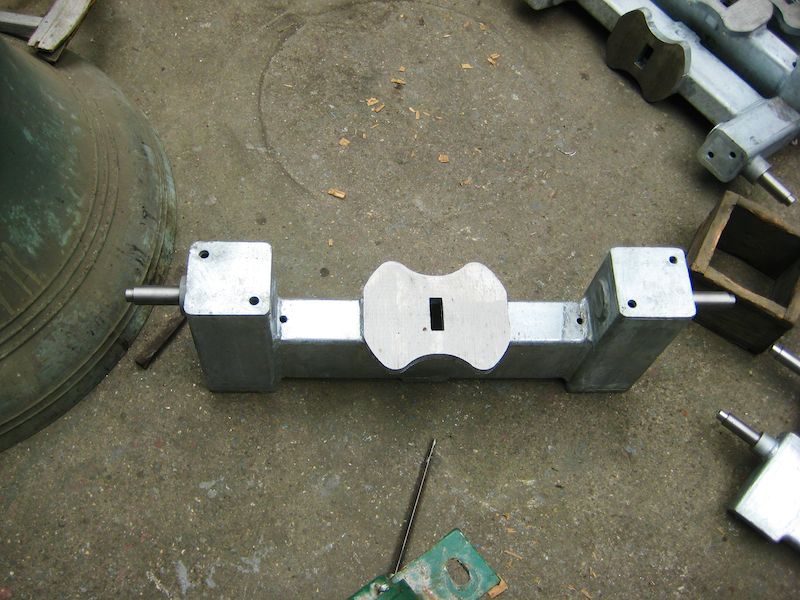 Headstock for one of our bells

That however comes later in the story of Saxlingham’s bells – now they are in the care of the Whitechapel Bell Foundry being tuned and finished ready to be returned to the church tower once it has been renovated and strengthened. 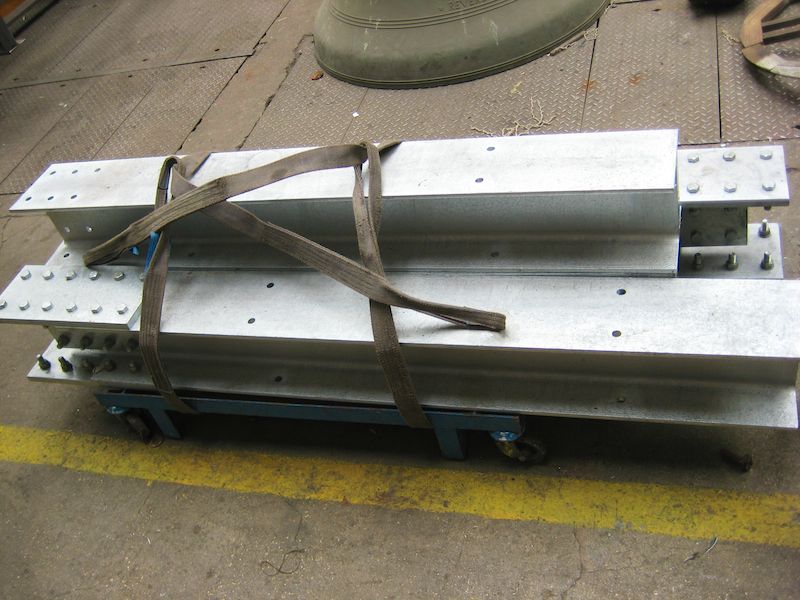 Parts required to hold the bells in the tower

We would like to thank all at The Whitechapel Bell Foundry for their kind welcome and for sharing their great knowledge in a fascinating experience for us all.